The strengths of the review are that it has been completed speedily and that it provocatively makes innovative proposals for restructuring the UK energy market and for re-modelling the role of government in delivering energy security, lower energy costs and carbon reduction.

The weakness is that the way the report has been presented risks undermining the vital transition towards a low carbon energy, as illustrated by the following headline in the Daily Telegraph;

Major public investment in assisting private and public sector innovators develop new low carbon energy infrastructure technologies and applications was necessary, and still is necessary, before markets deliver price reductions. This evolutionary process is very well illustrated by the most recent Contracts for Difference in Off-shore wind, the lowest of which is around £57 MWh

It is a good idea to take strategic national investment out of the direct service cost to consumers and to transparently present investment costs separately. What needs to be made clear is the governments commitment to making this investment happen.

My wish for 2014 is for the Sheffield City Region to become the most economically successful and sustainable place to live in the UK. A region that is forward-looking, led by innovation and improves the opportunities and well-being of everyone.

Sustainability is not just about re-cycling and saving energy, it is also about creating products and services that help us to reduce carbon and energy needs. Great examples of this are being developed and tested by businesses and the universities at the Advanced Manufacturing Park and elsewhere in the region. The demand for goods and services that promote sustainability is growing faster than demand in other sectors and we need to capitalize on this to promote growth and jobs.

A sustainable economy also raises the quality of people’s lives by improving health and well-being and creating opportunities that lead to fulfillment in education, work and in personal lives.

As well as running Green Directions, I am a member of the Sheffield City Region (UK) Low Carbon Sector Group.  Together with partners, I am developing a major infra-structure proposal; FutureZone 20:50.

FutureZone 20:50 is a proposal for an innovation park, close to the Advanced Manufacturing Park  www.attheamp.com/ , showcasing both a vision for living and working sustainably in the future and our region’s innovation and manufacturing excellence. It would include:

FutureZone 20:50 is about the future not the past. It is about inspiring and supporting sustainable growth for the economic and social benefit of people and communities.

My partners in the project are MMEK and Oliver Schutte. You might like to have a look at their websites to see examples of their inspiring work:

MMEK  –  a Dutch design company who have expertise in the creation of visitor attractions.         http://mmek.nl/

MMEK are currently working on an industrial/environmental museum in Zeeland  http://mmek.nl/en/#/mmek/work/industrial-museum-zeeland/ and have a lot of experience in the sport and leisure market e.g. the Dutch national football museum  http://www.voetbalexperience.nl/    They have also worked on visitor experiences for the Dutch flower industry and the Dutch water industry. You can see the full range of their work on the website.

Thanks to Ros Arksley from Nibbly Pig for this write up of our tasting event with PJ Taste, Barry Starmore and Gwilym from Launde Farm Foods.

Here is the sorry tale of our heatpumps

Eco Heat Pumps projected electricity use for the heat pumps     11,166 kwh per annum

The rabbit (casserole in the end) was magnificent. A richness of flavour that I have rarely tasted. A profound experience. 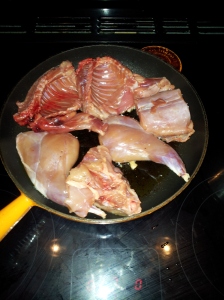 First trip into the office today sees the debris of unfinished work taunting me from various locations of the desk and floor. By and large, matters are under control. Rather than file nearly completed tasks I take pleasure in waiting until they really are finished before stashing them away.

My heart rate therefore calms as I realise that there are no real panics to deal with. I have some business events and weddings to organise which sees me tapping away at the computer in between calling various suppliers and customers. Orderliness is shortlived. Over the top of my computer screen I spot a furry creature emerging from the shrubbery just outside the office window.

Ever since planting the wildflower garden, which borders the shrubbery, I have been on rabbit watch. The seed company identified rabbit attacks as the main threat to the flowers reaching maturity. To counter this I bought an air rifle.

Throughout last season the rifle was regularly used. The rabbit population was not diminished. However, the pellets discharging did succeed in sending the hungry monsters sprinting off away from the flowers and across the fields.

For the last couple of months I have not seen any rabbits in the wildflower garden but today a very confident adult is staring contemptuously at me while munching on some seed heads.

Picking up my air rifle and the tin of pellets I head off to the utility room from where I can get a clear view of the wildflower meadow. Slowly I open the door. Unbelievably this is the precise moment that the breadmaker, sat on the counterside in the utility room, breaks into its next kneading cycle.

The rabbit hears the noise and turns towards the sound but does not bolt. Waiting a little longer for it to get accustomed to the machine noises I then slowly raise the rifle and ease it around until I have the rabbit in the sight.

At first I suspect the usual outcome after squeezing the trigger but then I realise that the rabbit has not completely disappeared. It has moved but not far. The next second it collapses and dies.

I am in shock. I am used to taking pigs to the abbatoir and preparing them afterwards but the act of killing changes the dynamic and I am confused about how I feel about what I have done.

My heart thumping I walk to the rabbit and bring it into the kitchen. Once I gutted and skinned a hare that someone else had shot but this will be the first time that I have prepared a kill of my own.

After consulting Seymour and Fearnley-Whittingstall I set about my task. Although very nervous at first I become more relaxed as the rabbit is tranformed from creature into meat. I am slow but in about 20 minutes I have a skinned and cleaned rabbit on the counter with its heart, liver and kidneys in a bowl nearby.

Alongside their annual top quality performance of Handel’s oratorio ‘Messiah, the Sheffield Bach Society also organises an annual performance of the work in which anyone can take part as a member of the chorus. Various locations for this have been used over the years including the Leadmill but recently Dore Parish Church has become its home and it was there that this year’s event was held last night.

It is an unmissable occasion for me. From the first notes of the overture I become overwhelmed by the beauty of the music and the wonderful feeling of joining with others to re-create Handel’s vision, completed within a month in 1741.

Last night I was once again inspired by Handel’s messages of hope against the inevitable backdrop of disturbing national and international events, and I am so grateful for the skills that enabled me to participate in the performance and for the opportunity to share the experience with so many other musicians and singers. Particular thanks to Simon Lindley for his exhilarating organ solos and accompaniment.

Skills = fun, participation, respect for others,

Whether you take a sacred or secular message from Handel

The system was perfect. A cool cellar kept our distinctive home-produced chocolates in fine condition.

Then, new technology for one of our wind turbines was installed in the cellar and it generated heat. Too much heat for the chocolates!

Our chocolates are one of the most popular elements of days spent at Green Directions for our clients. We make them with fresh cream and no preservatives to maximise the quality of the taste. Ingredients such as beer, liqueurs, fresh fruit, chilli and fresh herbs create delicious and unusual flavours.

The solution to the storage problem was to invest in a wine cooler. Fantastic. I can set it to the optimum temperature to ensure that our chocolates are always in perfect condition

So what happens next when you have just bought a farmhouse, circa 1800, with attached barns two other collections of outbuildings and 10 acres of land? This was the wonderful opportunity and challenge facing me and my partner Sarah Brown in November 2003. We had both renovated properties before including another barn conversion, a terraced house and a detached house but this was on a completely different scale.

I started to research ways of tackling the project and was soon spending hours at exhibitions, reading magazines, watching programmes such as Grand Designs and searching on the internet. It didn’t take long for me to realise that we would have to take a radical approach to the renovation if the family were to live in such a large property sustainably.

Walking into the National Homebuilding and Renovating Show at the NEC in 2004 I was completely overwhelmed by a vast range of unfamiliar technologies such as heat pumps, under-floor heating, electricity generators, mechanical ventilation and insulation systems. Piles of leaflets returned to Sheffield, followed by more research and meetings with potential suppliers until an outline plan started to emerge.

A core part of the plan was to put in under-floor heating driven by ground source heat pumps which I installed with the help of a friend, Clive Quarmby. We spent many weeks digging trenches, laying pipes, soldering, fitting valves etc., using 8 different diameters of pipe in the process.

Sarah was pregnant with Arthur (now 6 – birthday in February), while all this was going on. By the time she returned from hospital with Arthur most of the heating was working and some of the floorboards in the bedroom had been restored. She was not happy.

Heat pumps need electricity to work and so we decided that we would have to make our own (we are all electric) to meet our objective of becoming energy neutral. I researched solar and wind power during 2004. Solar panels were about 5 times more expensive than they are now and were much more expensive than wind turbines compared with the amount of electricity they were likely to make. So, we bought a 6 kilowatt Proven wind turbine expecting it to make about 10,000 kilowatt hours per year. It didn’t. It made 14,000 kilowatt hours per year – fantastic.

The only trouble was we were using a lot more electricity than I had anticipated despite investing thousands of pounds on insulation and high-tec glazing. More investment was needed – more insulation and more energy generating technology.

For the last 18 months we have had a 4 kilowatt solar power system which generated 4100 kilowatt hours in its first year and have just installed a 10 kilowatt Xzeres wind turbine which is on target to produce between 25,000 and 30,000 kwh per year. As a result, our electricity production is greater than our electricity use which means that we are saving tonnes of carbon from entering the atmosphere. The energy saving, together with Feed In Tariff payments, also mean that we now make a profit from electricity rather than having a bill.

There is still a lot to do as a part of the house does not have any wall insulation. Once this and other improvement works are done we will save even more energy.