My wish for 2014 is for the Sheffield City Region to become the most economically successful and sustainable place to live in the UK. A region that is forward-looking, led by innovation and improves the opportunities and well-being of everyone.

Sustainability is not just about re-cycling and saving energy, it is also about creating products and services that help us to reduce carbon and energy needs. Great examples of this are being developed and tested by businesses and the universities at the Advanced Manufacturing Park and elsewhere in the region. The demand for goods and services that promote sustainability is growing faster than demand in other sectors and we need to capitalize on this to promote growth and jobs.

A sustainable economy also raises the quality of people’s lives by improving health and well-being and creating opportunities that lead to fulfillment in education, work and in personal lives.

As well as running Green Directions, I am a member of the Sheffield City Region (UK) Low Carbon Sector Group.  Together with partners, I am developing a major infra-structure proposal; FutureZone 20:50.

FutureZone 20:50 is a proposal for an innovation park, close to the Advanced Manufacturing Park  www.attheamp.com/ , showcasing both a vision for living and working sustainably in the future and our region’s innovation and manufacturing excellence. It would include:

FutureZone 20:50 is about the future not the past. It is about inspiring and supporting sustainable growth for the economic and social benefit of people and communities.

My partners in the project are MMEK and Oliver Schutte. You might like to have a look at their websites to see examples of their inspiring work:

MMEK  –  a Dutch design company who have expertise in the creation of visitor attractions.         http://mmek.nl/

MMEK are currently working on an industrial/environmental museum in Zeeland  http://mmek.nl/en/#/mmek/work/industrial-museum-zeeland/ and have a lot of experience in the sport and leisure market e.g. the Dutch national football museum  http://www.voetbalexperience.nl/    They have also worked on visitor experiences for the Dutch flower industry and the Dutch water industry. You can see the full range of their work on the website.

Here is the sorry tale of our heatpumps

Eco Heat Pumps projected electricity use for the heat pumps     11,166 kwh per annum

Times are tough. Both parents have serious illnesses in a Birmingham hospital and I am visiting them 4 days a week from here in Sheffield.

My mum has had Alzheimers for some time now and has been looked after during this period by my father. Both are 83. My dad has had to do much of the nursing care for my mum as she has gradually lost functionality. He has been fantastic. He has developed his cooking skills and, prior to the hospital admissions, was confidently producing very good meals including traditional Sunday lunch. For him, anything less represented a decline in standards.

My mum used to become anxious if dad was absent from the house and as a result he rarely managed to pursue his own interests and activities such as going to concerts/theatre and playing golf.

Dad has also been the rock for my brother who was born with partial deafness and some learning disabilities. David lives independently and also has very good support from a good friend, Mick, but it is my dad who has been the key person in helping him to live something like a functional life.

In July this year, my mum developed a circulation problem in her right leg. While waiting for an investigative procedure the leg deteriorated and had to be amputated. She has been in hospital ever since though with her Alzheimers, she usually thinks she is somewhere else – on a train, on holiday etc.

While our family was in Toulouse in August, during our house exchange holiday, I received a phone call saying that dad had been taken into hospital. Within a week he had been discharged – they thought it was a bladder infection (in royal good company there).

I brought him home and stayed with him but it was soon apparent that all was not well. An ambulance took him back to hospital where they treated the symptoms of an infection but otherwise could not explain why he was still feeling ill.

At the point of him being discharged again, he suddenly declined badly and on September 13th was admitted to intensive care. By the time I reached the hospital that evening he was on a ventilator and had wires and tubes all over him. He had Pancreatitis and I was told that it was unlikely that he would survive.

But he did! A week later he was moved onto a ward where he remains. He is in a poor physical and mental condition, he is more confused than my mum at the moment, and is still in danger. At least he recognises me and is sometimes able to talk lucidly.

All of this means that I am visiting Wards 305 and 726 of the Queen Elizabeth Hospital 4 days per week and have taken over the management of my brother too. (Fortunately my father had the wisdom to set up powers of attorney for me with regard to both him, my mum and my brother to assist me if a situation like this arose – it has been a great help.)

Also of great help have been my family. Partner Sarah has a full time demanding career which now involves more jobs on our small-holding and more taxi runs with the children. The older children have been great too in both moral and practical support (notably Frankee looking after Arthur, our 6 year old). Lots of other help and support has come from friends such as Sam who has picked up Arthur from school on several occasions.

Under these circumstances it is a great source of upset for us to be put under pressure by an officer of Sheffield City Council’s Environmental Protection Service.

Earlier this year, after many installation problems, our 10 kilowatt Xzeres wind turbine finally started working. It has been producing electricity very well since but for some reason, in doing so, it is making more noise than other Xzeres turbines. This has induced a complaint from the couple who are our immediate neighbours.

Although the matter of noise nuisance is subjective and in this case our turbine’s noise is less than the traffic and other common machinery and wind noises, we agree that the issue should be resolved for everyone’s benefit.

To this end we have co-operated fully with the officer to get noise reduction action from Xzeres. Much success has been achieved, but further work is necessary. Action from Xzeres has not been as effective or timely as it should have been; however, an action plan is in place and the latest work will start on October 3rd and be finished in a few weeks. Despite this, the officer has told us to turn off the turbine. This will punish us for matters beyond our control at a time when we are already under duress.

The officer says that he has not taken the decision to shut down our turbine lightly and yet he has chosen to act at this precise time despite having received a plan to resolve the issues from the manufacturer, and having full knowledge of my parents’ illnesses with all its emotional and practical implications. He even telephoned me while I was in the intensive care unit of the Queen Elizabeth Hospital.

We are good citizens of this city. Our mission is to reduce our carbon footprint and by doing so to make a positive contribution. The carbon reduction plan has been running for several years and we are succeeding. We produce more electricity than we use (we are all electric) and through energy saving and generation we prevent around 35 tonnes of CO2 from entering the atmosphere each year.

We are strongly of the view that the officer’s ‘advice’ is therefore ill-judged, inequitable and partial. Furthermore it is undermined by his unprofessional and insensitive behaviour.

I can’t imagine that the workload of the Environmental Protection Service officers is comfortable. Therefore, why has so much time be devoted to our turbine when

The action of the officer is therefore not only inequitable and disproportionate, it is also a tremendous waste of public money. 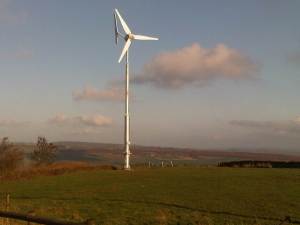 Wind turbines do not suit all locations but many businesses have sites that are fantastic for capturing the power of the wind to make electricity and this can result in huge savings in electricity bills.

We installed a 6 kilowatt Proven wind turbine 6 years ago and it produces about 14,000 kilowatt hours of electricity per year. Electricity costs about 13p per kilowatt hour to buy plus, for new turbine installations (turbines between 1.5 and15 kw), you receive 29.3p per kilowatt hour (index-linked) as part of the governments Feed-in-Tariff renewable energy incentive scheme (from October 1st 2012 this will fall to 21p per kwh). The total annual value of a 6 kilowatt turbine installed on a site as good as ours is therefore in the region of £5-6,000.

These turbines cost around £30-40,000 to install. Payback should therefore occur in around 6-8 years depending on factors such as maintenance costs and changes in electricity prices. The Feed-in-Tariff scheme lasts for 20 years which provides investment security. See the link below for more information about feed in tariffs.

The success of our first turbine has inspired us to put up another one in November 2011, a 10 kilowatt machine. These, together with our solar panels, should make us energy neutral and hopefully will give us an income from electricity instead of a cost.